Feeling better about Japanese: Give yourself some props

For those of you who’ve really poured through my blog posts, you know only too well how i’ve tried to balance my desire to learn and deconstruct my Japanese learning, while at the same time keep a balanced sense of motivation. Since I started seriously writing about “ideas behind learning Japanese” in late 2010, I’ve started and stopped a few times.  Sometimes it was stress, sometimes it was a lack of vision, other times I had other things on the brain. But always, the desire to learn creeps back into my vision every now and then, and when the desire returns, I tend to gain new insights into a few things. But before I chat about what i’ve been up to, i’ll say something about a video I recently watched.

Tim Ferris is the author of the 4 Hour work week and among being a fanatic about learning and discovering ways to make life awesome, he also speaks multiple languages and has theories on language acquisition that I’ve read about before. But I didn’t realize that Tim Ferris and I share a common behaviour that I didn’t understand very well. He gave a TED speech about “Feeling like the incredible hulk” in terms of setting a goal and achieving it. Essentially he talks about facing a fear by deconstructing it. In his presentation he chats about swimming, language acquisition and mastering Tango. Of course for me, I paid attention to the section on language acquisition. More so than what he said, it was how he was speaking that struck a chord within me.

In a similar way to how Tim Ferris spoke about “deconstructing” things into understandable and efficient pieces, I found that for the longest time,  I have been doing the same thing. When it comes to language acquisition, my largest hurdle has always been how I perceive myself relative to the goal I want to achieve. But when Tim Ferris was speaking, I started to do a backwards analysis of other things I did in the past where I focused massively on efficiency and “deconstructing” the process.

I have always been a person who is very interested in method and approach to goal achievement. When I watched Tim’s video, I realized with a very strong certainty this was a core aspect of who I was, I just …. never saw it as anything meaningful or important. But lately i’ve been working very hard on not just being efficient, but appreciating myself as a person. In fact, i’d say my pursuit of Japanese revealed to me some powerfully negative self-perceptions I had quite deep rooted in my mind, and my “battle with Japanese” was a  lot less a battle with the language but a battle with myself.

While I was watching Tim Ferris’ video (which i will paste below) I started to back track and make a note of anything regarding “efficiency and method” which I had used to create projects or learn new skills. I came up with a list of items.

Just a few things I should give myself more credit for

In 2006 – after reassessing and approach to academics at my University, I was able to have several 4.0 semesters while creating loads of free time because I did something I call “mapping the curriculum” which worked perfectly. (I completely forgot I did this, before I did this, my grades weren’t so hot) I was also able to qualify for a full scholarship that paid my tuition.

Over a two year period I wrote about five full length novels, (based on a standard novel assessment of 50,000-90,000 words) but what’s interesting is that my approach for writing was pretty mechanical. Three of the projects I wrote didnt’ take more than ten days at a time, because I was working based on word count or page count, after making a rough plot of the project. I stuck to no less than 10 pages per day and i was consistently able to pump out a 100 or 120 page manuscript in about a week and a half. I didn’t realize this “wasn’t normal” because I wasn’t doing these things around any kind of peer group. Plus, I was in school at the time.

I remembered that I was trying to work on getting more writing exposure and I devised something called the “STIP” (Short Story Incubation Project) where I ended up working on about six new stories in a two week period. I contacted people who wrote and read a lot and asked them to read the stories, give evaluations and make their top picks. Out of that batch, one story has been printed in a Tokyo-based literary journal, with another story being printed this month, or next month of this year. I was selected for an author interview and my short story also received a mention in the Japan Times in an article about the publication.

Even with my blogs, I’ve done over 450 blog posts across three of my blogs, with many of the average posts running well over 1500 words, so that amasses to about three full length novels worth of writing online alone.

In 2010 I presented during Tokyo Design week at an event called Pecha Kucha in Roppongi to a large group of creatives. The major significance of this is that in 2009, shortly after arriving in Japan, I could barely use Adobe Illustrator. After realizing that using photoshop is a bad way to do the kinds of designs I wanted to, I felt extremely stuck because I had already spent possibly thousands of hours on other designs I had made in photoshop and I would have to recreate many of these in Illustrator. In less than one year, I ended up getting my skills to a level where I even did some product design revamp for a company in Tokyo. I developed these skills this mostly by spending ungodly hours working on projects of my own across the areas of print, photo modification, t-shirt design, character design and regular hand drawn art. I forgot however, that I hadn’t been doing Adobe Illustrator stuff for very long.

Me presenting at Pecha Kucha in Tokyo

Film production is my focus on my mass communications degree, but I had taken a very circuitous path to finishing school. I studied the essentials of Film production in my last two semesters of school, but even up until I graduated, I had never taken any form of linear or non-linear editing class. In mid-2009 after deciding to start my web series, “Jamaican in Japan”, I developed my editing skills based on my understanding of shots, mood and my own personal touch. The result of creating the web series is that only a year and a half, I was able to go on Jamaica’s largest morning show speaking about my videos and blog. But in a more insane turn of events, I recently produced and broadcasted a TV episode which is a compilation of those original videos I had created in late 2009, when I had just started learning non-linear editing on my own.

My interview on Smile Jamaica the morning show

In terms of Japanese I hadn’t done much studying during my time in Japan as i’ve said numerous times on this blog. Only after I left Japan, did I seriously work on finishing James Heisig’s Remembering the Kanji. But what was bizarre, was that in an 8-week period last year, I learned more vocabulary and Kanji than I did in my first 2 years in Japan. My process is detailed on this blog, but basically all I did was implement a fixed revision schedule and a learning schedule that consisted of exposure to 100 new words per day using a program called Anki. In about 2 1/2 weeks I had developed the ability to read through about 1000 Japanese sentences and I was also able to read through my first Manga in its entirety in Japanese during that period.

I have since lost steam in that regard, but again I forget that my gains, when examined practically are a mark of a person trying hard but also try to work smart.

What does this mean?

It means that i am not typing these things to puff my chest and say “look at me”. In fact,  I never gave much of these things a passing thought which reveals a key aspect of my entire “self-view”.  After watching Tim Ferris’ presentation, I realized that I’m not just a guy with awkward desires to learn languages and do specific things. That maybe with a few tweaks, I can get the ball rolling in ways i can’t even imagine. I’ve said before that i’ve had issues with balance, seeing “the point” in doing things and now I have created a mantra that describes that I observe about the “Ferris-esque” fellows and the primary difference between them and me, and why they are more consistent:

The people i’ve observed have a consistently cheerful disposition and a guilt-free approach to the steps in actualizing their projects.

So many of the internet polygots, the founder of AJATT, Tim Ferris and numerous other language learners and achievers have this behavioral pattern. They don’t really “see” all the limitations, and even if they do, they deconstruct the mental association with it to keep going. But here is what’s mind-blowing. I am EXACTLY like that in certain areas, but for some reason I was NOT like that with my initial approach to Japanese! Somewhere along the line, living in Japan, being stressed, experiencing culture shock and so on, I couldn’t maintain a cheerful disposition and have proper balance in studying the language. The more I tried to study and the more tired and stressed I became, the more guilt I felt about not “hitting my goals”. I wrote about this in a previous blog post when I talked about Learning DNA.

This used to frustrate me to no end, because the people who made the most progress in learning Japanese tended to be reasonably balanced and have an “outlook” that allowed them to study in a foreign environment. I’d look on these people, when I was pretty unhappy and stressed and empty of motivation, feeling bad that I didn’t have the energy  to push and study my Japanese. So its clear what I have to do to take my current semi-intermediate level of Japanese to the next level, I have to deconstruct the association of negativity to learn Japanese, and associate positivity to all its current aspects.

Today I hopped randomly on a website that had a large list of grammar points. I’m at the point now where its not so much a matter of vocabulary that makes me stick with Japanese, it’s proper grammar to express myself. I haven’t done any kind of Japanese revision or reading or immersion since December and not only could I read almost all the example sentences, I found that I was not stressed looking at the 100 grammar points, because many of them were very familiar. As “bad” as I often label myself in Japanese, I definitely remember a time when looking on example sentences would make me cringe with fear. Now I just read through the sentence and get a stronger understanding of the grammar because i’m not worried about remembering vocab.

So I guess I have to keep telling myself that i’ve done a lot of things and that I shouldn’t’ give up because of some bizarre idea of who I am.  So its time to deconstruct cheerfulness, happiness and chill out. Like this guy here. 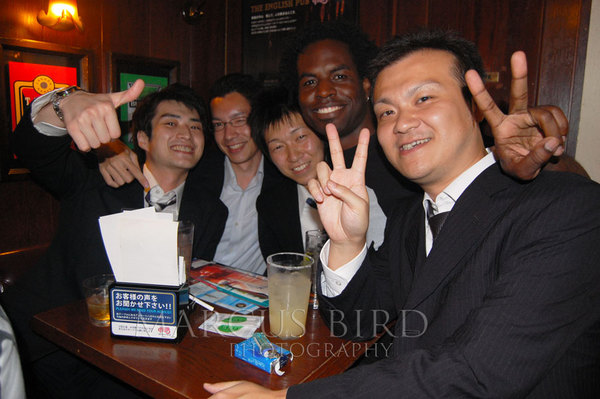