Quick update here. As you can see from the blog, I’m still a bit delinquent with my major Kanji study, possibly because I’ve been putting hundred hour weeks into my design work, but its still no excuse. Either way, I’ve found little points in time that I use to study Japanese.

I recently acquired a lovely slim Ps3, and last night, while playing a Japanese video game Siren: New Translation, I and a friend struggled to figure out some in-game instructions written in Japanese. By doing so, I did my first ever Anki SRS sentence entry and solidly learned a few new words in context.

What’s cool is that, i knew a lot of the Kanji on screen because of the Heisig method. Once I knew the word, I looked up the word on my iphone (using Kotoba), then pieced the words together to get the Japanese meaning. Through this, I was able to translate a few difficult sentences.

It felt amazing simply because I KNOW THIS WORKS. It gave me added hope that SRSing and all these things  really do blast your reading comprehension up there, you just have to stick with it.

It’s a survival horror game and instructions popup every now and then telling you to crouch, hide, etc. I started to memorize them after a while.

次に進む –  After this, you can advance.

What was cool was that, with every set of instructions, Kanji got repeated. So in one sentence, I was trying to figure out what “確認” meant. I knew the first Kanji was “assurance” and the second was “acknowledge” this was I was able to find:

かく and にん 。The word “kakunin” is = 確認 ＝confirmation. So from the following sentence I was able to learn the Kanji and gain understanding of a new sentence that I put in my SRS.

After this you will probably be able to confirm it/this.

After this you will be able to confirm what are you doing.

Now this translation might not be perfect, BUT, it shows me that because of my knowledge base of Kanji in English that, “sentence mining” especially in context, like video games, banners, etc. Is an amazing way to start getting the Kanji readings like crazy.

So I realize I can put tons of random sentences into my SRS based on stuff  I like from games, movies and so on and build up a nice pack to practice. I even modified one of the commands I learned into a sentence:

私は部屋に隠れる。- I hide in the room. 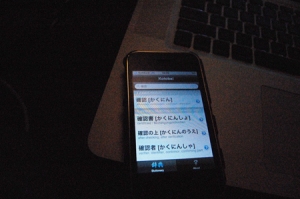 Writer, Designer, Filmmaker
View all posts by marcusbird →
This entry was posted in language. Bookmark the permalink.