850 Kanji! and another rant

I’ve hit a nice 850 Kanji now, and i’m finding its getting easier to learn certain Kanji. In a previous post, I mentioned “Marty McFly and Linking Images” and it is turning out to be MONEY with certain Kanji memorizations. I was able to use “Homer” (as in Homer Simpson) as the basis for the primitive for Husband 夫 (おっと）。This allowed me to link about 10 Kanji to the Homer simpson primitive, which makes recalling them easier.

Maybe I will make a Homer simpson post later. But I am finding that at this stage, I make SURE to take my time with the complex Kanji, and I scrounge through the Reviewing The Kanji website for good stories all the time. It’s an amazing resource. So I always have RTK1 ebook open, and then I’m either making up my own stories, or hopping on to that website because it helps me work MUCH faster so i don’t have to make up my own stories.

When I link images, I move much faster, which is why I think I have been able to do 200 Kanji around my fulltime job since the 1st of March. Also as I get closer, I work harder, because I’m desperate to start sentence mining, but i have to do this properly. I wanted to try and hit 900 Kanji today, but i am not sure if I will do that. When I go home I generally relax and take it easy, but I’m trying to hit the 2,045 within the next three weeks. By summer I want to be at about 2000 sentences, which would put me in a great place for reading.

I mentioned in another post that I have been translating some English stories, and this is great practice for learning grammar when you have a native Japanese to help you with it.

When I started this blog the process was difficult, and it has been rather on and off with my AJATT attempts because forcing more Japanese into my brain was hard, but after four months, I am getting used to it and I am moving in a more streamlined way. I am listening to more Japanese music, and constantly trying to read and write in Japanese. My sentence translation practice is done mostly in class, where I backwards translate what the Japanese teacher is teaching in English. For example, today they were learning:

What are you doing now? あなたは今なにをおしていますか？

What I learned was “(command form of verb)+shiteru tokoro desu.” means “-am doing something now.” So I can say cool stuff like…

Not sure if that is 100% correct, but its cool I know I can say that … if I’m wrong, a Japanese person will politely correct me, and then I will run back here and fix the blog entry. Either way, 850 Kanji is good. I’m really looking forward to hitting my 1,000th Kanji for my second 500 Kanji milestone, who knows, I might even upload a video. As usual, the Kanji book is below. Almost ready to start a new book. 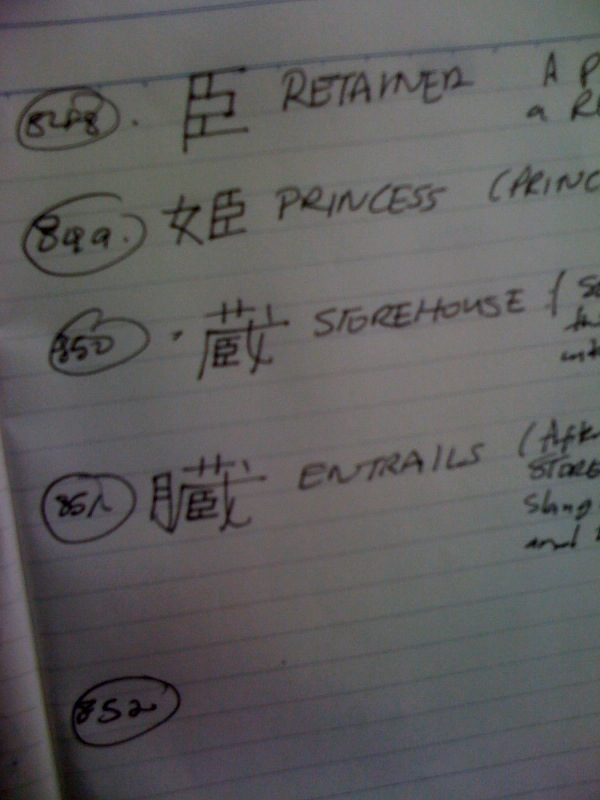